Ok so who names their company “Gullibles”. Well that is exactly what our daughter did when she realized that the kids at her school would buy almost anything if given the right motivation (or in adult terms the right marketing tactic). Fortunately, the other kids do not know what the word means or if they did she did not think it mattered.

As to an 8 yr old having a business well, please keep reading to hear more of the story…

Viola’s Gullibles was invented by our 8 yr daughter. Her main goal at the time (and she was in grade 3) was to find some way to make a little money to buy a toy that she wanted. Of course, she asked us her parents, and we bluntly said NO. Then at school there was a rummage sale to raise money for a charity, and it gave her an idea. The kids at school were happy to buy items from the sale and were plenty excited about it even if the items were a little used. So promptly she took some of her old toys to school and sold them to acquire the money she needed to buy the beloved toy she was eyeing. She found that selling the items was easy and that was when she caught the bug to be entrepreneurial and in her words become a “seller”. The excitement of selling merchandise to others has been a continual driving force since that time.

At the Calgary Comic and Entertainment Expo 2018 – in BuyMore Costume!

After that we started teaching her about inventory and she purchased a 100 little soft emoji pillows and started selling them at school. She hired two other students from her grade and instructed them to bring her customers. These two kids were paid in product. Unfortunately, one of the kids spoke negatively about her business, so she fired the kid and hired another. Sales went along pretty well until a handful of older kids got wind of what she was doing and cornered her in the school. They bullied her by saying she was not allowed to sell and that she was being a bad kid. Once Viola was in tears, her teacher happened by and rescued her. Hard lessons for a 8 yr old.

The teacher thought that the pictures were cute and took Viola to the office to discuss the matter with the vice-principal. It turns out that the general school policies say that students are not allowed to sell items at school unless it is a special event sanctioned by the school board. I thought that this would be the end of it, but about a month later Viola came home and told me that the only reason kids have money at school is to buy candy. She knew exactly what would sell and we went out to buy the candy in bulk and make up little packages. She sold the items for 50 cents, and they contained some jelly beans and bubble gum totaling about 14 to 15 cents for her depending on the package. It was a pretty good profit margin.

Well she was only allowed to take 20 packages to school a day, and she was right that the kids would buy them with their pocket money. She was selling out before the first bell. Unfortunately the kids were buying too many packets and filling their desks with the candy. This lead to Viola being dragged down to the principal’s office for a talking to. I would like to thank the Vice Principal for laying out the law of the school to Viola, but also for telling her that he admired her passion for selling (entrepreneurship).

In the summer before grade 4, Viola decided she needed an online store in order to keep selling her products. We have complied, with a huge learning curve, but are determined to steer the course, and allow her to do more and more of the computer and marketing projects.

For everyone who has supported our daughter and our endeavors over the years, we thank- you and will keep you posted! 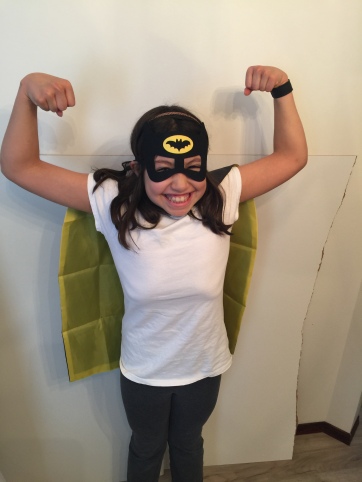 To our little super hero!